We are clear about the benefits that Mexico offers, not only as a national and foreign tourist destination, but as a destination that retirees seek to spend the rest of the best days of their lives.

To begin with, I think it is important to point out that the above is true since the number of Americans living in Mexico has been on the rise and they represent a significant demographic group. As of 2020, more than 65% of immigrants in Mexico are from the United States, that is, approximately 797, 266 people. Mexico is home to more American expatriate retirees than any other country in the world.

The US Embassy in Mexico City estimates the real number to be 1.5 million or more. And that’s probably an undercount because so-called «snowbirds» or circular migration between the US and Mexico is not taken into account.

The largest retirement communities are found in: San Miquel de Allende; Puerto Vallarta; Lake of Chapala in central Mexico and Baja California Sur, distributed between Los Cabos, La Paz and Todos Santos, according to the US Embassy.

What are retirees looking for in Mexico and why do they find it so attractive?

We know that a determining factor is the low cost of living in Mexico compared to the United States and this is what allows them to afford a lifestyle and acquire a second residence in our country.

Also, the culture and cultural exchange that occurs, apart from the proximity of our countries and the coexistence that follows. The popular opinion is, and it is true, that people in Mexico are very friendly (perhaps it is part of the culture). It’s normal to nod or wave when you pass someone on the street or stand behind them in line at the bank. Complete strangers say «Provecho!» (basically means «enjoy your food») to other diners when entering or leaving a restaurant. And all this makes those who come from outside feel not only that they are welcome, but that this is also their home.

Now, the already formed communities of expats agree that language has not been a problem when residing in Mexico, since in most coastal cities the inhabitants speak English and there is a very specialized market that covers all their needs in their language. Similarly, this coverage of needs includes the almost total appearance of the offer to which Americans are accustomed: Walmart, Sam’s Club, Home Depot, Starbucks, Costco and others.

Immigration requirements are also not a problem for Americans who retired in Mexico. To begin with, the American citizen can enter as a tourist without further requirement, only his passport is enough. But if he wanted to apply for a visa, the process is simple and takes less than an hour. If what you want is to live permanently in Mexico, the procedure to become a Mexican resident is also very simple for Americans. For those who do not want to get involved with the bureaucracy of obtaining a visa or permanent status, they just have to leave Mexico on their own before the end of the six months of approved stay and return whenever they want.

In addition to the above, it is valuable to take into account what they are looking for and what retirees look for the most when looking for the ideal place to do it. According to the International Community Foundation, most retirees visit the location they have chosen for their retirement several times before purchasing a property and this is what they take into account the most in coastal cities

Retirees who decide to retire abroad visit their chosen community before purchasing a property for their retirement. In fact, many of them discover these places as tourists during their vacations or when they visit them for long periods of time and stay in a rental property or in a timeshare condominium. Additionally, people who retire in these communities bring their friends. A recent study documented that 95% long-term retirement, especially in cities that already have a large retirement community. The existence of a strong, active and organized retirement community is a factor that attracts other retirees to these destinations.

The reasons why retirees choose the cities they choose is because of the lifestyle, the low cost of living, the climate and the proximity to the United States. Within the lifestyle, the activities of your preference are included, which are for example: fishing; the swimming; bird watching; sailing and scoring, but his favorite activity is «going for walks on the beach».

Another matter of great importance is that the americacons appreciate social interaction and culture, which is why it carries great weight in their decision. Due to the interest of American retirees in establishing a sense of community in their adopted home, they often create their own social networks that grow in size and strength over time. English masses in churches, bingo games (instead of the traditional Mexican lottery) as well as other English-speaking places to socialize like restaurants and cafes have gained popularity in more retirement communities like Mazatlan and Puerto Vallarta. It is also common to find English-language newspapers, magazines, mailing lists, and Internet sites in coastal communities. These culturally familiar and comfortable interactions make it difficult for retirees to socialize with their Mexican neighbors.

Now, what aspects do retirees most dislike in their life on the coast of Mexico? Garbage, discharge of sewage into the sea, unplanned urban growth, noise pollution, visual pollution (blocking the view of the sea), restriction of access to beaches and lack of respect for the laws and regulations of planning and urban development.

These are variables to be taken seriously because they not only affect the quality of life of those who are here by choice, but also because many retirees recommend their retirement community to family and friends, the fact that the lifestyle of beach and good quality of life will attract other residents through informal word of mouth marketing.

Greater attention should also be paid to adequate urban planning at the municipal level, to corridors with ocean views, to public transport and to pollution as a priority before tourism promotion messages that announce «sun, beach and fun». 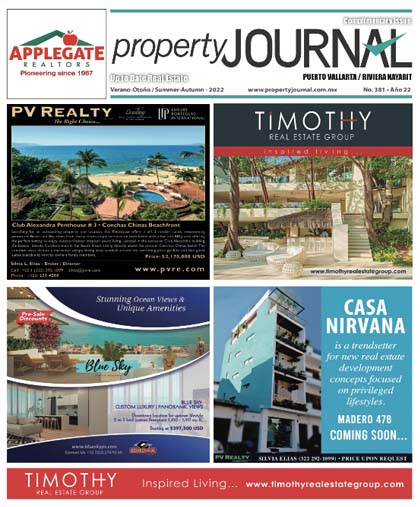